Classrooms Helping Kids
It is the mission of Classrooms Helping Kids to provide students with the opportunity to impact the lives of orphans by raising funds for the construction of orphanages in developing countries. Our goal is to see students become compassionate heroes by providing the homeless with homes, families, educations, and bright futures.

We are excited to share the highlights of our trip to India with you. We have an album with some of the many photos we have from the dedication of our two homes in Kurtha and Vijaywada. Thanks to your support and encouragement, 27 children were rescued and welcomed into these homes!! We hope you enjoy the photos we have posted on Facebook. Make sure to like our page if you haven't already done so!!

www.facebook.com/classroomshelpingkids
Posted by Classrooms Helping Kids at 1:09 AM No comments:

We are excited to update you on our trip to India!  As you know, we are opening two orphanages on this trip, and we have been so blessed by what is happening here.  Two days ago, we opened our very first Classrooms Helping Kids home in Kurtha, India, and today we are excited to head to Vijaywada to open the second orphanage.  Aside from being provided with a safe home, as well as fresh food and water, each student in the orphanage receives their very first backpack filled with school supplies.  They also are granted access to a first rate education taught by people who love them and want to see them have a better future.  We have enjoyed meeting the house parents at each of the homes, and trust that the children are being well loved and taken care of.  We are so excited for the future of Classrooms Helping Kids, and look forward to seeing miracles happen in the lives of many kids to come! 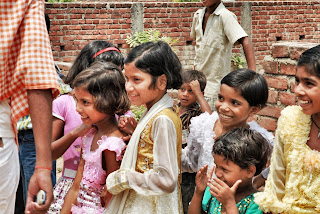 Posted by Classrooms Helping Kids at 8:18 PM No comments:

Wow!  All the details have come together so well, and we leave for India in just 13 days to dedicate 2 houses in India!  We are so excited to meet these 27 children and show them their new lives filled with hope!! 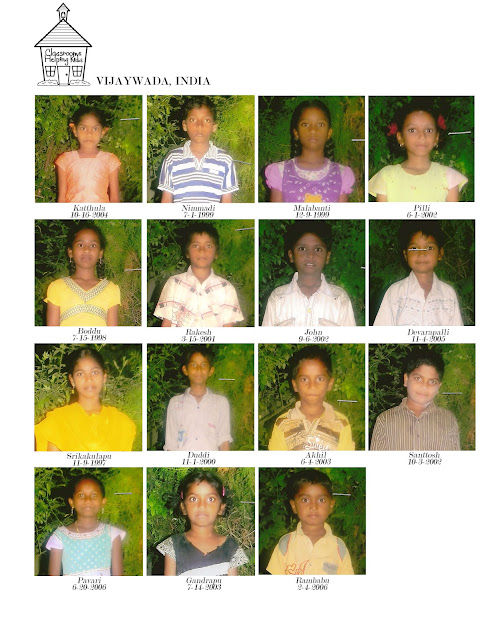 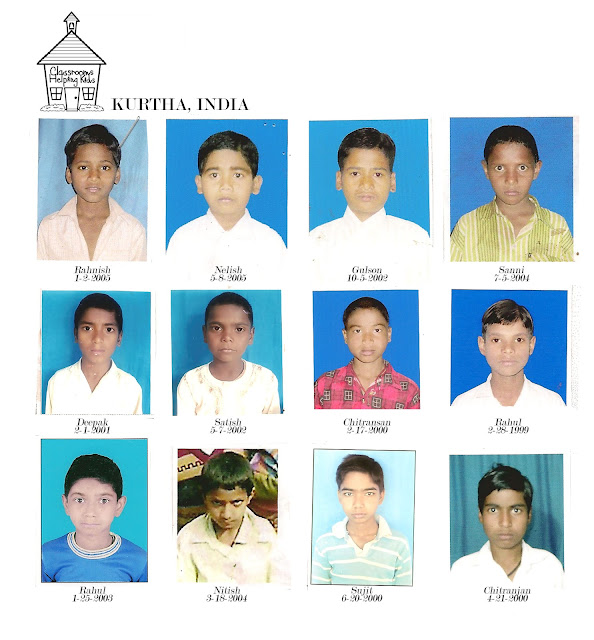 (Note:  It is traditional in Indian not to smile or show teeth for pictures.  We can't wait to see their smiles in person!)


Posted by Classrooms Helping Kids at 7:10 PM No comments:

Classrooms Helping Kids: The Road from Dream to Reality 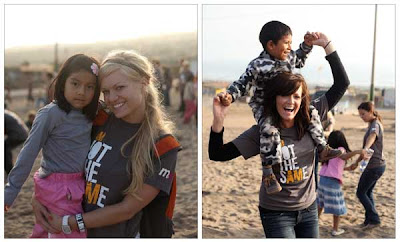 I sat across from Chandler this summer at our hotel in Lima, Peru. We were exhausted from a fast-paced week of humanitarian-aid work. Though our weak flesh was failing us, our conversations were alive with dreams of great life purpose and legacy. It was during this conversation that Chandler looked at me and said, “Kristin, we should start orphanages.” We were both teachers, we both loved kids, and we both saw the dire need to provide for orphan children around the world. So, of course I replied, “Sure, that sounds good.” If only it were that simple.

Fast forward to mid-September. Back in America, both of us had inundated ourselves with work—new school years and new students. But our dream had not been forgotten. We met together, lattes in hand, to brainstorm ways our dreams could turn to realities. After catching each other up on the latest school stories, it became obvious to us that our passion for teaching could and should be the driving force for the vision. To me, one of the neatest things about teaching is watching students take ownership of an idea. If this vision was to be, it had to be something that students could latch onto and place high urgency on. There was only one way to find out…

Sitting with my students, I challenged them to recall a recent Social Studies lesson. “Can anyone remember what we discussed a ‘basic need’ is?” Hands shot up around the circle. As I called on a student to answer, they reported to me with ease that basic needs are the necessities that people require to survive. Students were able to, with no trouble at all, list off the basic needs we had learned about: food, water, clothing, and shelter. As I gave myself an imaginary pat on the back, I played a video that was developed by some friends of mine that have had experience building orphanages in India. (To see the video, go to http://www.youtube.com/watch?feature=player_embedded&v=ukRkdLXcdCc) I watched jaws literally drop open as these second graders discovered that there are kids living on streets without anyone to care for them, eating food that is thrown away as garbage. They became intrigued by the idea that homes/schools are being built to help these kids, and I shared my secret with them—my “teacher friend” and I were thinking up ways that kids in America could help these kids in other countries. Instant excitement filled the air, and students began offering up their own ideas: “The kindergarten class does a lemonade stand every year to raise money and help people. Could we do that?” “Maybe we could have another hat day like we did last month!” Watching the imaginary light bulbs turn on in the minds of my students was the confirmation I was seeking—there would be no more valuable way to help the orphans of the world than through the compassion of students who are blessed to be in America. “Classrooms Helping Kids” was created—the name of the organization: perfectly fitting.

As the vision continued to be shared with friends and connections continued being made, we were overwhelmed by the response. We were blessed to have the support of our friends at Angel House Rescue Orphanage guiding us and offering us a partnership in their already-established and successful infrastructure in India. Details of non-profit logistics, school fundraising ideas, and graphics/logos were developing. Meetings and phone conferences continued to move the vision along at a pleasantly fast pace. Both Chandler and I discussed the vision with our building principals and secured their invaluable support during the development process. Meanwhile, my students kept the vision alive in our classroom: “Miss Cumming, will we be doing anything about the orphanages today?” The question was repeated throughout the schooldays in various ways. I took the advice of the videographer working with the vision and showed the orphanage video again. I told students that they could have the chance to write what they would like to share with other kids in America who would be interested in helping raise money to build orphanages. The seriousness and passion with which they took on the project was again an inspiration to me, and the ideas they scribed onto their handwriting papers shaped a compassionate script for a future video they hoped to film. As the students left for holiday break, I was left with the realization that they had just put together a script that was more genuine and effective than I could have ever composed by myself.

Just five days before Christmas, I received a phone call from Chandler that would be the most exciting news yet. In sharing the Classrooms Helping Kids vision with family and friends, she and her fiancé had caught the attention of corporate sponsors. Two sponsors in particular were impressed by the opportunity of the vision and had each promised to donate the money to start an orphanage for 12 children! “This is happening!” Chandler exclaimed to me as we moved our vision from dream to reality.

It is at this time that I am excited to share the beginning stages of Classrooms Helping Kids with you. We are now in the planning stages for the two orphanages that are to be constructed in India this summer! It is from these orphanages and experiences that we plan to expand our vision to the schools and classrooms of America. We are so blessed to partner with students and offer hope to those who are lacking it. We look forward to keeping you updated as the pieces continue to assemble together, and thank you in advance for your invaluable hopes, prayers, thoughts, and support!

P.S. – We would really appreciate your support on our very newly-developed Facebook page. Please go to http://facebook.com/classroomshelpingkids and become a fan!
Posted by Classrooms Helping Kids at 3:58 PM No comments: